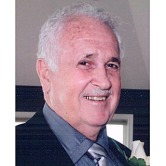 TYPER- Edward (Edd) of Port Colborne passed away on Wednesday November 20, 2013 at the Welland County General Hospital in his 67th year with Julianna at his side. Loving husband of Julianna, dear father of Tracey (Edward) Tait of Niagara Falls, Shari (Richard) Rodgers of Waterdown and Angela (Scott) Bell of Hamilton, loving grandfather of MacKenzie. Brother of Dr. Peter Typer, Richard (Astrid) Typer both of Port Colborne and Joseph (Kim) Typer of Niagara-on-the-Lake. Son-in-law of Julianna Klujber Sr., brother-in-law of Jim (Kelly) Klujber. Loving uncle to many nieces and nephews. Edward was predeceased by his parents Roman and Cornelia Typer. Born in Breda, Holland in 1947 he moved from Niagara to Port Colborne in 2005 where he resided since that time. He was a long serving member of the Niagara Regional Police from where he retired in 2007. Edward was an avid and long-time member of the St. David’s Lions Club and the Port Colborne Lions Club and was a long-time blood donor with the Canadian Red Cross. He greatly enjoyed his years of sports coaching and particularly coaching his daughters. His favourite pastimes were morning workouts at G & M Fitness and his euchre play in both the Welland and Port Colborne Euchre League and the Ridgeway / Crystal Beach Euchre League. He will miss and greatly be missed by the Friday afternoon euchre bunch. Edd will sadly and lovingly be missed by so many dear friends throughout the region. There will be no visitation. Funeral service will be held at the DAVIDSON FUNERAL HOME 135 Clarence St. Port Colborne on Saturday November 23, 2013 at 10:30 a.m. Julie and Edd’s family would like to invite everybody to a celebration of his life on Saturday November 30, 2013 at 1:00 p.m. at the Port Colborne Lions Hall, 49 Chippawa Road. If so desired, memorial donations may be made to the Port Colborne Lions Club. Online guest register and condolences available at http://www.davidsonfuneralhome.com

This entry was posted in Obituaries 2013. Bookmark the permalink.