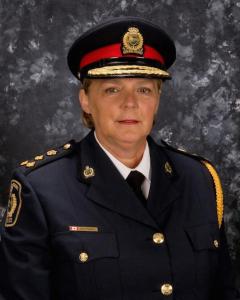 It is with profound sadness that we announce the passing of Wendy Edna Southall, with her family at her side, on Wednesday, June 1, 2016. Wendy was born on January 28th 1951 in Hamilton to Edward and Winnifred Raike. After finishing high school in Dundas, Wendy attended and graduated from Ontario Police College in 1970 as the only female cadet. She served as a police officer in Toronto until 1979 when she left policing to raise her family. She resumed her career in law enforcement by joining the Niagara Regional Police Services Board as a bylaw officer in 1982, and was ultimately appointed Board Administrator in 1990. On January, 1, 2001 she moved from her position with the Board to assume the position of Chief Administrative Officer of the Police Service. From there, she was promoted to the position of Chief of the Niagara Regional Police Service effective January 1, 2005. She was the first female Chief of Police in Niagara, and remains the longest serving chief in the history of the Niagara Region. After retirement, Wendy continued her public service through volunteer work for a variety of charitable organizations. Although she reached the pinnacle of her career as a police officer she will be remembered by family and friends for much more than that.

She was a loving wife to her late husband Bob. She provided her children Erin (Mike) MacQueen and Brent (Stefanie) with more love and guidance than any child could ever hope to receive. And then she gave all of that and more to her grandchildren, Molly, Ella and Charlotte. To those outside the family who knew her well, she was a true and loyal friend in every sense of the word. Family and friends are the true measure of a person. Wendy was blessed in that sense, and blessed those around her. She is survived by her loving and devoted sister Marion Vanderlinden and husband Arnold as well as her sister Beverly Rozell. Sister-in-law to Sandy and Jerry Cheatley, Shirley and Pete Arnold, Bill and Ruth Southall, Joe Southall and her mother-in-law Kay Southall. She was a loving Auntie to many nieces and nephews. Words simply cannot express the deep loss that those who loved her are feeling.

Visitation will be held at the GEORGE DARTE FUNERAL CHAPEL, 585 Carlton St., on Sunday, June 5, 2016 from 2-5pm and Monday, June 6, 2016 from 4-8pm. A Celebration of Wendy’s Life will be held at a later date. If desired memorial donations to the YWCA of Niagara in Wendy’s memory would be greatly appreciated by the family.

This entry was posted in Obituaries 2016. Bookmark the permalink.