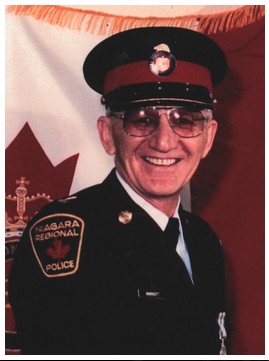 It’s with deepest sadness that we announce Clay’s passing on Saturday, December 12, 2020, at the T. Roy Adams Centre at Linhaven, with his son Rod at his side.

Clay was the much loved husband and best friend of Janis (nee Winchester) for 62 years. He will be sadly missed by his son Rod (Shirley) Marriott of St. Catharines and his daughter Lynn (Jim) Windjack of Thorold. Much loved Papa to Jennie (Dean) Coulson, and adored great grandpa of Nash and Reid, of Lloydminster, Alberta, and beloved Papa of Kim Marriott (Ephryn Giesbrecht), of St. Catharines. He was the step grandfather to James Windjack and Lisa (Jeremy) DiFranco, both of St. Catharines and step great grandpa to Ben DiFranco and Sammy Windjack. Clay is also survived by his sisters-in-law, Rae (late Gus) MacKenzie, of Halifax, and Sarina (late Sam) Marriott of Niagara Falls, his brother Rick Marriott of Stevensville, Clay’s best friend of over 65 years, Merv (Ann) Connor, of Pembroke as well as numerous nieces and nephews. He was predeceased by his parents, George and Dola Marriott, his brothers, Walt, Graham and Sam, and his sister, Helena and her three daughters, Lila, Jessica and Elizabeth.

He was born in Marmora, Ontario, on July 15, 1937 but raised in Chippawa. Clay joined the Royal Canadian Navy in 1955 and was honourably discharged in 1960 with his proudest moments being a member of the Queen’s Household Guard in Ottawa in 1957,and piping Her Majesty Queen Elizabeth Il ashore during her royal visit in 1959. Clay joined the City of St. Catharines police department in 1969 and retired from the Niagara Regional Police with the rank of Inspector in 1998*. He was extremely proud of being the only constable to teach at Aylmer Police College and was relied upon by numerous police departments, lawyers and others for his expertise in the Canadian Criminal Code.

Our family would like to express our deepest gratitude for the wonderful, compassionate and respectful care that Clay received at the T. Roy Adams Centre. They made the difficult journey through dementia easier and for that we are forever grateful.

In honouring Clay’s wishes, cremation will take place and there will be no service. The family would appreciate any memorial donations in Clay’s name be made to the T. Roy Adams Centre for Dementia Care at Linhaven, to be able to assist them in their work for dementia patients and their families. Arrangements have been entrusted to the Simpler Times Cremation Centre, 905-937-4444.

To plant a tree in memory of Clay Marriott, please visit Tribute Store

*Inspector Marriott commenced his career as a Police Constable with the St. Catharines Police Department in 1966.  He continued his career with the Niagara Regional Police Service after amalgamation in 1971.  During his career he had various assignments of which included uniform patrol duties in St. Catharines and Niagara Falls, and further assignments to St. Catharines CIB, Youth Bureau, Fraud Unit, Training Unit, Professional Standards Unit, and the Chief’s Office.  After a 28 year career, Inspector Marriott retired from the Service in 1994.